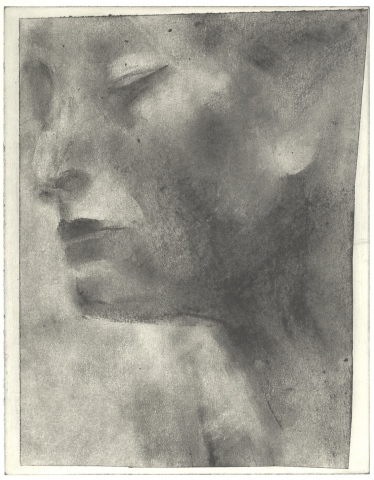 ON PATTIE LIPMAN'S PRINTS A review from a show of Monotypes, Lithographs and Polymer Gravures From the Albany Times Union review by William Jaeger

“…We actually find Lipman tapping into a spiritual or psychological state in the subject. I’m tempted to see the prints as giving a face to the unconscious. In the especially primitive, almost unreadable gaze of the young face in “Small Veil,” for an easy example, there is the opening of poetic feeling, of ingenuous suggestion. Likewise, the closed eyes and slightly altered skin tonalities of “Demeter” and “Core (Persephone)” give the faces the appearance of surfaces with no clear tactile form, like light through a fog. The plain stare of another small work, “The Locket,” reminds me of a 19th century tintype, the woman’s face stark and distant, yet very real.

The role that photography plays in any of these works isn’t clear. Some may actually be printmaking versions of photographic originals, generations removed. But the old notion of a photograph capturing a person’s soul is at work here, regardless. If this is partly the result of the printmaker’s craft, which creates the aura partly responsible for the results, so be it.

There remains a connection between subject and viewer that is, however mediated by art, still unbroken. This strikes me true in three small landscapes as well, which are strong works in their own right. But it is most important in the faces. At their best, they are like veils of our own human drama, elegant and silent.”